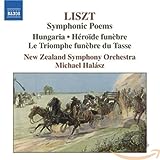 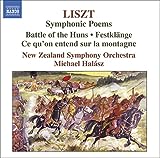 Five Stars
This is a fine collection, I enjoyed it.
Best Liszt performances and recording
I have been the principal contrabassoonist and a bassoonist in the National Symphony Orchestra for the past 43 years, and am also an avid fan of Franz Liszt's tone poems (some of which I have performed over my professional career). I have several recorded renditions of the three works on this recording. Only one other (Kurt Masur/Gewandhaus-Orchester Leipzig on EMI) can be compared to this amazing disc. I find Michael Halász's interpretation fresh and with great depth of understanding of this composer's style. The performance by the New Zealand SO is above fantastic, with woodwind and brass playing of the highest order (beautiful bassoon playing…and it is interesting that Maestro Halász is himself a virtuoso bassoonist…so he obviously knows how to bring the very best out of winds and brass). The recorded sound is terrific, with natural depth and perspective, with just enough hall sound to provide more resonance to the lower instruments. Highly recommended! 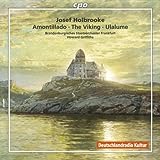 TREMENDOUS !!!1
I AGREE WITH MOST OF THE ABOVE REVIEWS. THIS IS A TREMENDOUS DISC OF MOSTLY LITTLE KNOWN MUSIC. CPO ARE TO BE CONGRATULATED YET AGAIN FOR MAKING IT AVAILABLE. THE ORCHESTRA ARE SPLENDID AS IS THE RECORDING. THE "3 BLIND MICE VARIATIONS I FIND NOT AT ALL TIRESOME AS SOME REVIEWER SAID, BUT DELIGHTFUL AND THE FINALE IS JUST WONDERFULLY AMUSING. WHY DO WE NOT SEE HOWARD GRIFFITHS OVER HERE LET ALONE THE ORCHESTRA. BUY THIS CD - IT'S A WINNER.
More rare British joys
I had never heard of Josef/Joseph Holbrooke until I came across this disc whilst browsing the net. Having an interest in music that's off the beaten track, I decided to try it - and it is truly revelatory. Researching a little about Holbrooke, I found that he was sometimes referred to as "the cockney Wagner", and this is borne out by his rich orchestrations, grandiose gestures and high drama. This is an ideal introduction to his music - three tone poems, "Amontillado", "Ulalume" (both based on works by Edgar Allan Poe) and "The Viking", together with a set of variations on "Three Blind Mice" which even features a quote from "The British Grenadiers" towards the end - I kid you not. All the works are given great performances by the German orchestra in exemplary recordings. I look forward to investigating this composer's work further. Here's hoping that CPO will issue the other tone poems together with Holbrooke's eight symphonies - this music really deserves a wider audience.
This is a tremendous disc!
Holbrooke isn't a familiar name but his name meant fame in the UK between 1900 and 1920. His music is English opulence - is that possible? - with a highly charged romantic tonal language. It mixes Elgar's nobility with Richard Strauss' fantasy world. He liked romantic Edgar Allan Poe subjects and composed sometimes creepy spooky music, full of fantasy and strange orchestral effects. Problem with this music is that's mostly a `once played, quick forgotten affair, on to the next disc please' but I kept playing this disc for two consecutive nights. Why? The performance is so white hot - so exaggerated, so Stokowski like - that you forget you deal with a B-composer. The recording is excellent and everything gets an A++++++++++ treatment. So it sounds more interesting than it is and I like that. Second when Holbrooke asks for 8 horns you get 8 (many times you get 4, money matters you know, and with a good ear you can hear that difference). Strings are plenty and lushly romantic, percussion is excellently sharp focussed. Timpani are timpani and not plush drums played under a blanket. And that for an German orchestra! Bravo! Third: very good documentation! More Holbrooke this way please CPO! And please provide a pair of magnifying reading-glasses with the disc for your next Holbrooke so I can easily read the booklet notes. 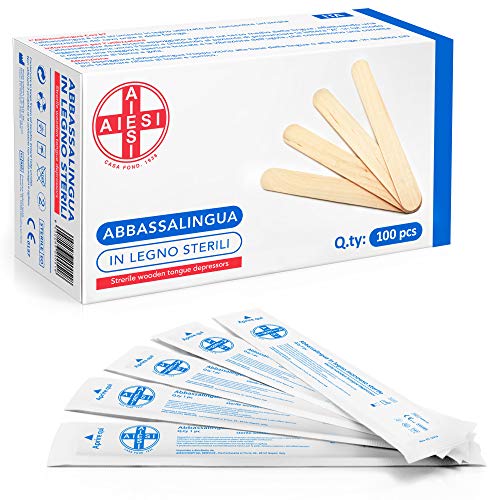